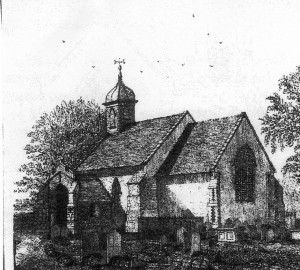 The first reference to a church on the site of St Andrew’s can be found in the Domesday Book of 1086:

So there has been a church on the site of St Andrew’s for almost 1000 years, the existing building being at least the third on this site. The first recorded incumbent, John de Boteler, was priest in the parish from 1314 to 1344, when the church was described as a small building “consisting of nave, chancel, south porch with bell turret and one bell.”
The foundations for the present building, designed by the architect R M Phipson, were laid in 1875. A statue of St. Andrew, recognisable by the diagonal cross that he carries, occupies the niche above the south porch – the main entrance of the church – which is all that remains of the previous medieval structure.

From the west door there is a wonderful view across the valley towards Buxhall church and beyond. The tower above the west door houses six bells and the spire stands almost 300 feet high.
Memorial slabs to the Wollastons, former lords of the manor, were relaid in the floor of the tower having been removed from the earlier church. More can be found in front of the chancel arch and two thirteenth century grave slabs are mounted against the west wall.

Inside the church there is an octagonal font-a memorial to Alan Kitching, the only son of the then vicar – which was remodelled in 1875 to match the style of the rest of the new building.

Large Victorian angel corbels support the main timbers of the nave roof; some are positioned between the windows while others overlap the arches – a result of some repositioning of the windows after the final design of the church was approved, but before the work started!

An ornate rood screen separates the nave from the chancel. This was erected in 1925 in memory of those who lost their lives in the 1914-1918 war.

Behind the altar there are ornately carved stone reredos, to the right the piscina and the sedilia.

The side chapel contains memorials, mainly to the Wollastons and Pettiwards, some of which date from the eighteenth century and were reinstalled having been removed from the previous smaller church.

The fine stained glass windows, from the studio of Clayton and Bell – one of the largest Victorian producers, known for its quality and design – are among the most striking features of the church.

To commemorate the Millenium, some beautiful examples of modern church embroidery were introduced and kneelers were designed, worked and financed by local people.  Since then more kneelers have been added, including some to mark the centenary of the First World War

See the Angels & Pinnacles website for more pictures and information.

1086: first reference to a church standing on the site

1784: Terrier recorded only one bell

1836: tower beyond repair – churchwardens applied for a faculty for its removal

1862: H Davy, Globe St., Ipswich, produced an engraving of the church (see top of ‘ABOUT’ page) – the only known picture of the church before it was rebuilt – showing church with no tower, but a cupola at west end

1875: foundation stone laid for rebuilding of the church

1877: construction work on the tower and spire commences

1883: wall built around the churchyard, with gates costing £5

1895: vicarage given to the Benefice

1903: oak choir stalls and reading desk given by RJ Pettiward

1908: benefactor Squire RJ Pettiward died, having been churchwarden for 64 years

1910: ‘Six bells – with the tenor weighing 12cwt – cast by John Taylor & Co of Loughborough, donated by the Pettiward family in memory of R J Pettiward, Churchwarden for 64 years’.

1950: electric blower installed for the organ

2010: re-leading and repair of windows north side of aisle